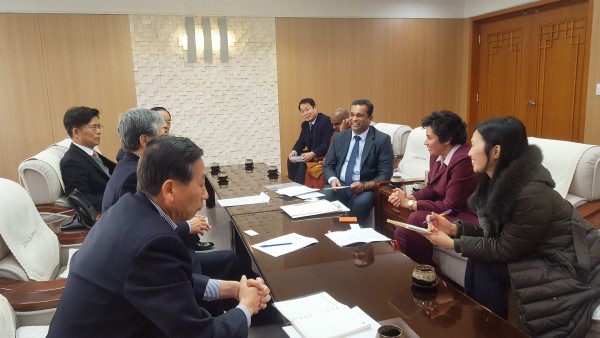 The Ambassador of Sri Lanka Manisha Gunasekera met with the Deputy Mayor of Daegu Metropolitan City Kim Yonchang on Wednesday 3 January 2018.  The meeting focused on cooperation between the Daegu Metropolitan Government and Sri Lanka and the celebration of the 70th anniversary of Independence of Sri Lanka in Daegu City (at Daegu Prince Hotel) on 4 February 2018, with the participation of the Sri Lankan community in Korea. Deputy Mayor Kim welcomed the celebrations and agreed to extend the fullest support of the Daegu City Office to celebrate Sri Lanka’s Independence Day in Daegu.  There are approximately 1,000 Sri Lankans living and working in Daegu city and around 7,500 in the greater Daegu region.