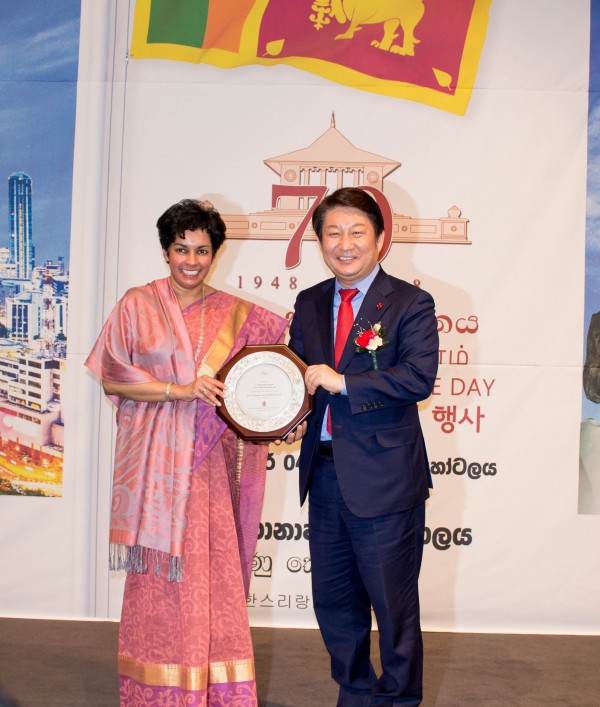 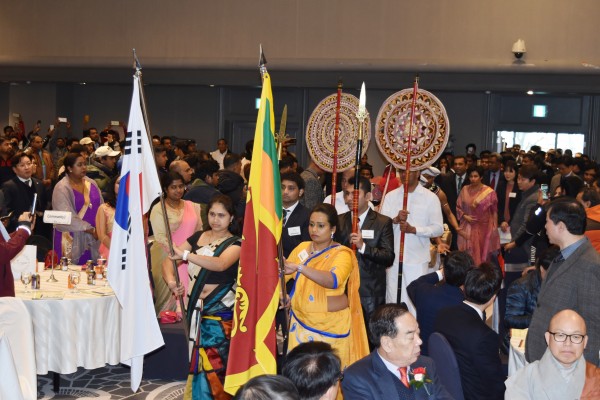 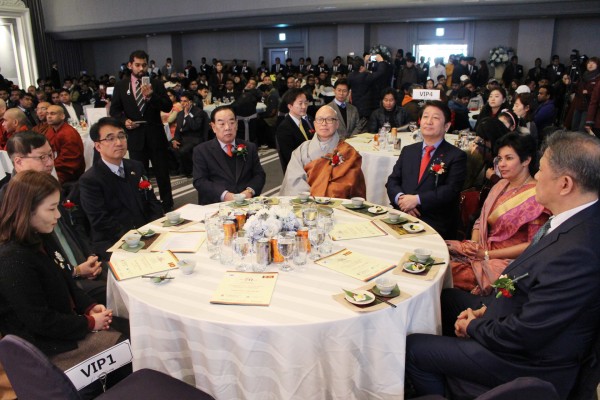 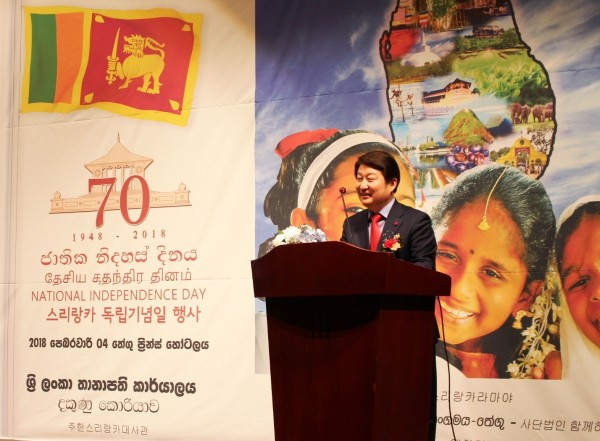 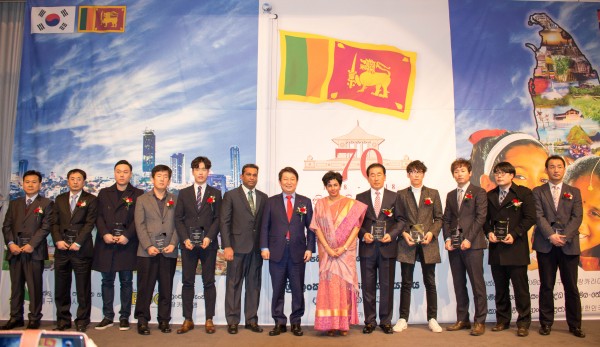 Presentation of plaques of appreciation to 10 selected CEOs / senior management of SME companies in Daegu City employing a significant number of Sri Lankan workers. Sri Lanka’s Ambassador Manisha Gunasekera, Mayor of the Daegu Metropolitan City Kwon Young-jin and Counsellor (Employment & Welfare) of the Embassy Jagath Batugedera are in the picture with Korean employers. 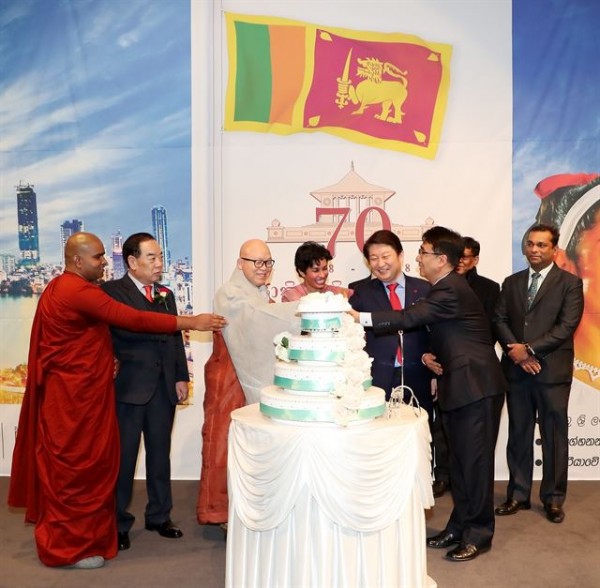 Cutting the cake for 70th anniversary. 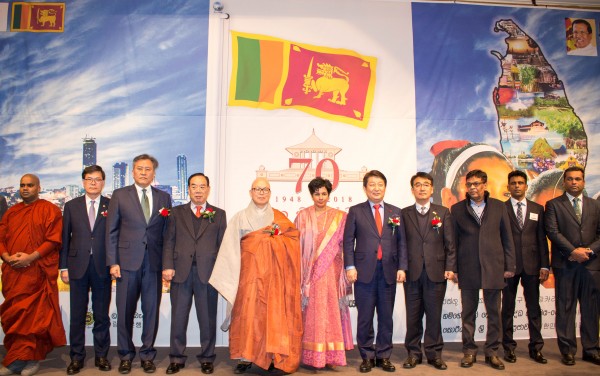 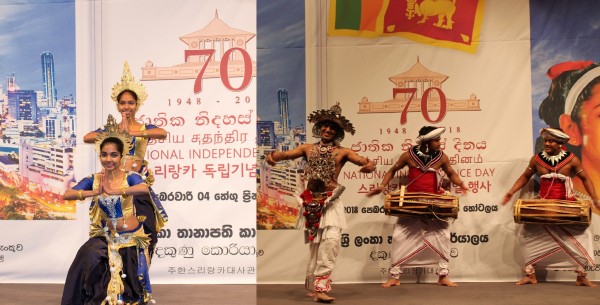 With the Daegu Organising Committee of independence celebrations (Sri Lankan employees). Ven. Manakandure Pannasara Thero is also in the picture.

with Korean Dignitaries and the Sri Lankan Community

​The Embassy of Sri Lanka in the Republic of Korea, in collaboration with Daegu Metropolitan City and the Sri Lankan community, successfully celebrated the 70th anniversary of independence of Sri Lanka in Daegu City on Sunday 4th February 2018, with the participation of the Mayor of Daegu His Worship Kwon Young-jin as the chief guest.  The celebration held at Daegu Prince Hotel under the theme of ‘One Nation’, was organsied by the Embassy with the support of Sri Lankaramaya Temple in Daegu under the leadership of the Most Venerable Vijithawansha Thero, Hamggehaneun Sesang Association, and the Sri Lankan community in Daegu.  The event was attended by over 70 Korean dignitaries including the Chief Priest of Donghwasa Temple The Most Ven. Hyokwang, and clergy from Korean Temples in Daegu; Vice Mayor of Daegu Metropolitan City Yu Joonha; Committee Vice Chairman of Daegu City Council Cho Hong Chul; Director, Human Resources Development Service of Korea Lee Byung-wook; President, Medical Center of Hanni University Byeon Joon- seok; senior management of selected Korean SMEs in Daegu employing Sri Lankan workers; as well as Korean media, among others.  From the Sri Lankan side, the event was attended by the Maha Sangha, approximately 650 Sri Lankan employees living in different regions in Korea, and members of the Sri Lanka Students’ Association in Korea.

Sri Lanka’s Ambassador to the Republic of Korea Manisha Gunasekera warmly welcomed the Maha Sangha, Chief Guest Mayor Kwon Young-jin of Daegu Metropolitan City, as well as Korean dignitaries and Sri Lankans who attended the event.  She extended her deep appreciation to Mayor Kwon and the Daegu Metropolitan City Office for the strong support extended to Sri Lanka and the Sri Lankan community in Daegu, as well as for the Mayor’s participation in the celebrations.  The Ambassador referred to the special significance of celebrating the important milestone of the 70th anniversary of independence in Daegu City, which combined with the surrounding region, is home to about 7,700 Sri Lankan employees.  She reiterated the commitment of the Sri Lankan Embassy in safeguarding the welfare of Sri Lankan employees in Korea at all times.

Delivering Congratulatory Remarks on the occasion, Mayor Kwon Young-jin strongly welcomed the selection of Daegu City for the celebration of the 70th independence celebrations of Sri Lanka, and extended the deep appreciation of the Korean Government and Daegu City to the 1,000-strong Sri Lankan community in Daegu for their contribution to the economy of Daegu as well as the Republic of Korea.  Highlighting the economic and cultural links between Daegu City and Sri Lanka, the Mayor welcomed the strengthening of relations between Korea and Sri Lanka and between the communities of both countries through celebrations of symbolic significance such as this National Day.

The National Day Messages of President Maithripala Sirisena and Prime Minister Ranil Wickremesinghe were delivered at the event by senior staff of the Embassy.  The Ambassador presented special plaques of appreciation to the Mayor of Daegu City and other Guests of Honour, as well as ten (10) Heads of Korean companies employing Sri Lankans, in consideration of their strong support to enhancing Sri Lanka - Korea labour relations, and for their contribution to the Sri Lankan economy.

The celebrations also included serving of Sri Lankan food, sweet meats and Sri Lankan drinks, as well as an attractive cultural programme featuring traditional Sri Lankan dance and music, a Korean taekwondo performance, as well as a beautiful recital of well-known kavi (original composition) by Manakandure Pannasara Thero, who travelled from Sri Lanka to participate in the celebrations.

The independence celebrations were organised by the Sri Lanka Embassy with the support of the Employment and Welfare Section, under the purview of Counsellor / Employment & Welfare Jagath Batugedara, continuing the Embassy’s concept of holding independence celebrations in regions in Korea hosting a significant concentration of Sri Lankan employees.