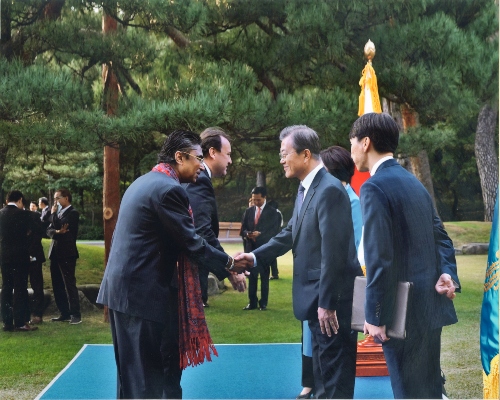 The Ambassadors who are based in Seoul were invited for a Gala Reception at the Cheong Wa Dae, known as the “Blue House”, recently. The Ambassadors had an opportunity to converse with His Excellency the Present of the Republic of Korea on a bilateral basis with the facilitation of the Official Interpreter of Cheong Wa Dae. Ambassador Dr. Mendis, during the meeting, expressed gratitude and appreciation to the Republic of Korea for the assistance, cooperation and facilitation extended over the years to the advancement of socio-economic and commercial sphere of Sri Lanka. In response, President Moon Jae-in stated that the Republic of Korea considers Sri Lanka as a critically important and vital partner and ally, particularly, in the context of the “New Southern Policy”. Ambassador Mendis further expressed gratefulness to President Moon Jae-in for accommodating a large number of expatriates of Sri Lanka in the Republic of Korea who are gainfully employed in the country. He expressed his greetings and best wishes to the peoples and to His Excellency the President of Sri Lanka. After the formal meeting, all guests were entertained at the garden of Cheong Wa Dae for an informal reception.