The CEO of Lodule International Ltd., Mr. Byungchul Kim, and the Senior Director of the Company explained and expounded, in detail, to Dr. Mendis and senior officials of the Commercial Division of the Embassy of their Company and the functionaries of the company since its formation in 2004. Chairman Kim stated that most of the products and goods manufactured in Lodule International are being exported to other countries mostly to the ASEAN and China. He added that Lodule has a large facility in China, and along with the facilities in the RoK, they produce contactless thermometers, Android cloud tablets, iPhones & Smartphones mostly for the export market. During the meeting, Ambassador Dr. Mendis and Commercial Division of the Embassy had a zoom/virtual conference call with Mr. Dhammika Samarawickrama, Chairman of Micro Electric International in Sri Lanka, to discuss the stratagem to expedite the IJV in Sri Lanka. The two IJV partners from the RoK and Sri Lanka were, first, introduced to each other by the Most Venerable Katuwana Vijithawansha Thero of Sri Lankaramaya Temple in the City of Daegu in the RoK. 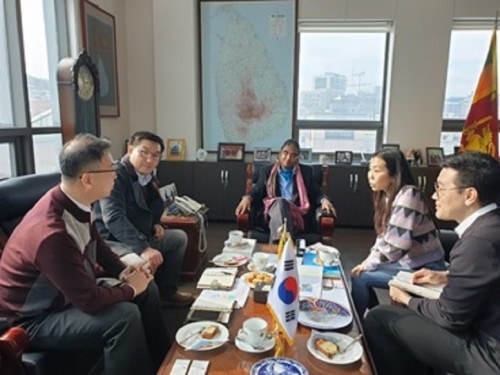 Senior Director Mr. Donghan Shin and Chairman of Lodule International Ltd. Mr. Byungchul Kim (on the left) discussing with Ambassador Dr. Mendis and the officials of the Commercial Division of the Embassy of Sri Lanka

This would be the first ever occasion that state-of-the-art Smartphones are manufactured, solely, in Sri Lanka. The Micro Electric International, the Sri Lankan partner of the IJV, has been in operation for nearly three decades and Chairman Samarawickrama has been engaged in a large number of charitable and philanthropic activities, mostly with regard to extending of employment opportunities to prisoners in prisons in Sri Lanka, apart from commercial and economic endeavors. The negotiations and discussions have been conducted on virtual/zoom due to the COVID-19 pandemic. During the zoom/virtual conference call at the Embassy, with the intervention and intercession of the Ambassador Dr. Mendis, Chairman Mr. Byungchul Kim and Chairman of Micro Electric International, Mr. Samarawickrama, discussed that the Non-Disclosure Agreement (NDA) had to be agreed upon by both the sides and would follow up with an MoU, thus paving the way for the operation of the proposed IJV to manufacture Smart/Mobile phones in Sri Lanka.

According to both the partners of the IJV and Dr. Mendis that this initiative would function as an investment and commercial catalyst with a synergistic impact for more IJVs and investments to flow from the RoK to Sri Lanka. Chairman Mr. Kim and Dr. Mendis noted that despite the COVID-19, the equity/stock market of the RoK, known as KOSPI, had reached its all-time high and is larger than the entire GDP of the RoK. In other words, once the equity market in any given nation performs well, it would lead and pave path for those listed corporates to commit investments not only organically but also internationally as well. Today, the RoK is amongst the 10 largest economies in the world and one of the most globalized nations as well. Ambassador Dr. Mendis and senior officials of the Commercial Division of the Embassy, during the zoom/virtual conference call, stated that there are a number of large corporates and chaebols in the RoK awaiting to commit investments in Sri Lanka since the investment milieu is most congenial and conducive with increasing economic and commercial opportunities and vistas, particularly, given the location of Sri Lanka.

The Republic of Korea