The Ambassador Dr. A. Saj U. Mendis together with the Minister Counsellor (Commercial), Ms. Rekha Mallikarachchi of the Mission and Mr. S.C. Byun, Chairman of the Korean Residents Association of Sri Lanka and a leading corporate figure based in Sri Lanka for an extended length of time, called on the President and Board of Directors of the Hanseo University, last week, with a view to expound and to seek as well as to convince Hanseo University to set up a branch/university in Sri Lanka.

The Hanseo University has state-of-the art equipment such as highly advanced airline simulation equipment to extend the best possible training for its students. The President of Hanseo University stated that the Korean Airlines and other regional airlines choose most of the pilots and aircraft engineers. 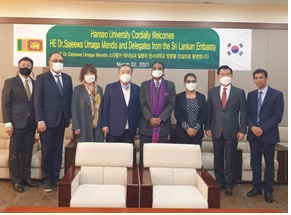 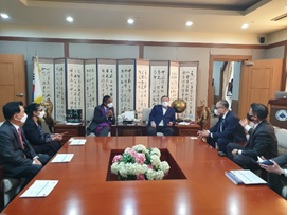