﻿ The Mayor of the City of Ansan in the Republic of Korea, His Worship Wha-Sub Yoon, extended an invitation to Ambassador of Sri Lanka, Dr. A. Saj U. Mendis, to deliver a Special Lecture to Members of the City, Council Members, Legislatures and Ansan Migrant’s Counselling Support Center at the City Hall of Ansan. Ansan is amongst the largest industrial cities in the RoK with a large foreign multi-cultural population including a large contingent of Sri Lankan migrant workers. The Special Lecture delivered by Ambassador Dr. Mendis, primarily, focused on culture, education, economy, tourism and most importantly the criticality and seminality of migrant workers for Sri Lanka, amongst others. 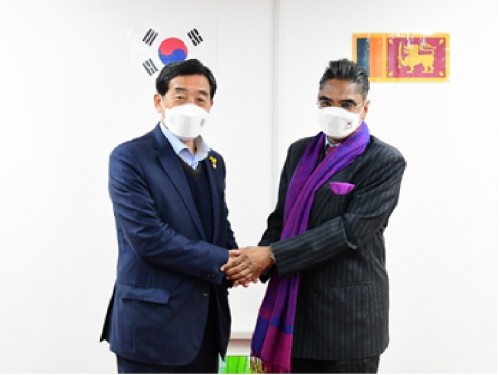 The Mayor of City of Ansan, Wha-Sub Yoon, greeting Ambassador Dr. Mendis at the City Hall of Ansan

His Worship the Mayor Wha-Sub Yoon conducted a bilateral discussions with Dr. Mendis, lasting approximately 30 minutes, before the commencement of the Special Lecture at the City Hall. The Special Lecture was attended by an audience of well over 100 and lasted over 60 minutes followed by Q&A Session. During the bilateral discussions as well as during the Special Lecture, Dr. Mendis expressed appreciation and gratitude to the Government of the RoK and in particular to the City of Ansan for hosting and facilitating a large number of Sri Lankan migrant workers. Further, these migrant workers including Sri Lankan migrant workers are extended comprehensive counselling support and facilitation services, thus making their work and stay fruitful and constructive. 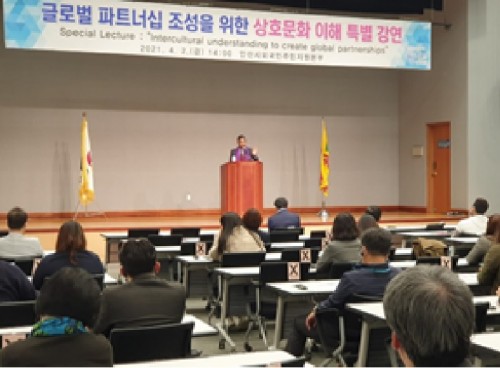 Dr. Mendis delivering the Special Lecture at the auditorium of the City Hall

Dr. Mendis enunciated to Mayor Wha-Sub Yoon that in year 2019, the total foreign remittances of Sri Lanka were approximately USD 7.2 billion or 9% of the total GDP of the country. Dr. Mendis further accentuated that the total foreign remittances from the RoK alone in 2019 were USD 520 million or 0.65% of the GDP, despite the total number of Sri Lankan migrant workers are only 22,000, relatively a much smaller number compared to the Sri Lankan migrant workers in other countries such as in Middle East.

During the lecture, Dr. Mendis touched upon the education system of Sri Lanka impressing the advancement of education with particular focus on STEM (science, technology, engineering and math) subjects as well as other liberal arts disciplines. Dr. Mendis highlighted the rich and diverse history of Sri Lanka as well as the fact that Sri Lanka was chosen in year 2017 and 2018 as amongst the most desired and sought after touristic destinations in the world by none other than “Lonely Planet”, “BBC Good Foods” and “National Geographics”, amongst others. He further added that Sri Lanka is literally and metaphorically of “Mecca for Tourism”.

With regard to migrant Sri Lankans, Dr. Mendis earnestly implored and entreated His Worship the Mayor of Ansan and other dignitaries to seriously consider receiving new entry migrant workers, known as new-entrants, to the RoK. This was stated in the context that there are over 2,000 Sri Lankan migrants, who have already pursued and passed the Korean proficiency examination and undergone the required trainings and familiarization

and are awaiting for an extended length of time in Sri Lanka without being able to travel to the RoK to assume their new employment. Dr. Mendis further stated that the COVID-19 pandemic has been reasonably well controlled and contained in Sri Lanka and less than a dozen of Sri Lankan migrant workers in the RoK has ever contracted the COVID-19 out of a total of well over 20,000. Ambassador Dr. Mendis also stated, both during the bilateral meeting with the Mayor and the Special Lecture that the RoK developed to being the 10th largest economy of the world, today, mostly due to innovation, inventions and creativity and Sri Lanka too is eager to partner and emulate the RoK in this sphere.